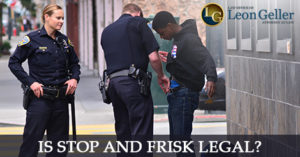 “Stop and frisk” police searches have been in the news lately, and there is a great deal of confusion surrounding these types of searches and their legality.

Any police stop has the potential to compromise a person’s rights under federal or state law. If you suspect a police search or arrest violated your rights, don’t wait to speak to a Maryland criminal defense lawyer. The outcome of your case depends on getting an experienced lawyer on your side from the start.

Stop and frisk is a complicated subject, and discussions about it could fill an entire legal textbook. On the whole, the U.S. Supreme Court has ruled that these types of police stops are constitutional. Of course, they are only constitutional when police perform them properly, and that is where much of the controversy lies.

So-called stop and frisk stops were first examined by the U.S. Supreme Court in 1968 in a case called Terry v. Ohio. In that case, the Court created a stop and frisk exception to the constitutional right to be free from unreasonable searches and seizures. In fact, stop and frisk searches are sometimes called “Terry stops” due to this seminal case.

For police to perform a Terry stop, however, the Court also held that the police must have a reasonable suspicion that an individual is engaged in criminal activity or that the individual is armed and dangerous.

In its opinion, the Court acknowledged that police officers have a dangerous job. To protect themselves, they sometimes need to determine if an individual is prepared to do them harm.

However, Terry stops are not without controversy. In New York City, for example, a federal judge ruled in 2013 that the way NYC police officers were using the city’s stop and frisk law was unconstitutional, following studies that showed the department overwhelmingly targeted communities with a high percentage of minority residents.

The judge ruled that officers were making stops based on an individual’s race, and not because police had reasonable suspicion of criminal activity. The mayor of NYC appealed the ruling in 2013, but his successor — who took office in 2014 — withdrew the appeal, which left the ruling in place.

The state of Maryland has its own stop and frisk law, which is found in Section 4-206 of the Criminal Code of Maryland. However, some cities in the state have moved away from these types of searches.

In other cities, city officials and police departments have agreed to revise their policies regarding Terry stops. As recently as September 2016, the media reported that the City of Baltimore was under pressure from legal support groups to end all stop and frisk practices.

It goes without saying that stop and frisk laws and procedures are a lightning rod for controversy. When this type of search happens to you, however, it stops being a political talking point and starts being a very real and sometimes terrifying encounter.

If you have been subjected to a police stop carried out without a warrant, you need the help and advice of an experienced Maryland criminal defense lawyer. These are complex cases that require an in-depth analysis of the facts and the police officer’s conduct.

Speak to a Rockville Criminal Defense Lawyer about Your Case

The outcome of your case depends on getting experienced legal help. It’s important to choose a lawyer who can help you defend your rights. Call a knowledgeable Maryland criminal defense attorney today to discuss your case.