Home » Blog » What Parents Need to Know about the “Clown Attacks” 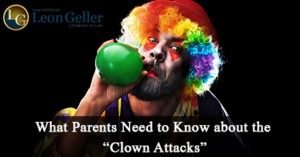 Over the past few weeks, there have been growing reports and rumors about people dressing up as clowns and acting menacing. What started as a hoax has evolved into something much bigger and more disturbing, with copycat reports popping up in several states, including Maryland.

With Halloween approaching, many parents are understandably nervous about allowing their children to trick-or-treat amid potential threats involving people disguised as clowns. So far, authorities believe the “clown attack” trend started as a prank that has gotten out of control.

If you’re the parent of a teen, it’s important to talk to them about being responsible throughout the Halloween season. Young people might be tempted to jump on the clown hysteria bandwagon by attempting to scare their friends or children in the neighborhood.

However, there has been at least one death associated with the hoax, and police have arrested 12 people in connection with clown attack stories. If your child or teen is charged with a crime over Halloween, it’s important to get in touch with a Maryland juvenile crimes lawyer right away.

A Hoax Fueled by Social Media

As reported by Time, the first clown-related story surfaced in South Carolina, when the media published reports about adults dressed as clowns attempting to lure children into the woods.

Although the claims were unsubstantiated, the story was quickly picked up by the national media and shared on social media.

Within a short period of time, similar reports popped up in other states, including Alabama, New Jersey, and Wisconsin. In Pennsylvania, a group of approximately 500 college students conducted a clown hunt after rumors spread of a clown making threats on campus.

Police in Georgia charged four people for making terroristic threats toward schools about clowns on Facebook. In Pennsylvania, a 16-year-old boy was fatally stabbed by an 18-year-old individual wearing a clown mask.

According to reports, police believe that stories of “clown attacks” are part of a hoax that has gotten seriously out of hand. If you plan on trick-or-treating this Halloween, there are several things you can do to keep your little ghouls and goblins safe:

Avoid masks. Not only do they obstruct a child’s vision, they can arouse suspicion and fear, especially with people already on edge due to stories of threatening clowns circulating online.

Wear reflective clothing. Purchase clothing or costumes the glow in the dark or feature reflective patches. You can also use glow sticks or flashlights.

Find alternative activities. You don’t need to roam the neighborhood to get a great candy haul. Many churches, community centers, and even shopping malls host trick-or-treating events. These activities are usually well-lit and conducted indoors, which can keep everyone safer.

Stay connected. Carry a cell phone with you when you venture out. Make sure loved ones know where you will be trick-or-treating, and check in with them often as you make your rounds in the neighborhood.

Speak to a Rockville Juvenile Defense Lawyer about Your Case

The police are taking clown-related stories very seriously this Halloween season. If your child or teen has been charged with a crime, don’t wait to speak to a lawyer. Call today to speak to a Maryland juvenile defense attorney about your options.