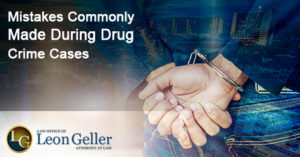 There are many different laws on the books pertaining to the possession of illegal drugs. If you are caught with illegal drugs, you could be facing a long prison sentence and very expensive fines. Most people fail to realize just how many mistakes can be made during a drug crimes arrest. Both the person being arrested and the officers at the scene can make mistakes. Here are some of the most common mistakes that can be made during a drug arrest.

Mistakes Made By the Drug Offender

Getting arrested for a crime is a very stressful experience. Often times, the person being arrested will be so overwhelmed they will make a series of mistakes such as:

Common Mistakes Made By Police Officers During Drug Arrests

The person with the drugs is not the only one who can make mistakes during this type of arrest. The following are some of the most common mistakes police officers make in cases like this:

Also Read: What is a Drug Court?

Are you facing drug possession charges? Then be sure to contact the Law Office of Leon A. Geller today! Attorney Leon A. Geller has over 25 years of experience that he can put to work for you.