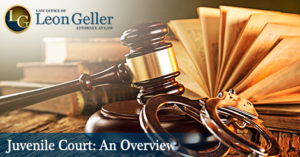 In the United States, there are three types of cases that are subject to the jurisdiction of juvenile court. They are: delinquency, dependency, and status offense cases.

Delinquency cases involve violations of the law by minors that would be considered crimes in adult court. Juveniles are alleged to be delinquent, as opposed to be being criminal defendants. In juvenile court, a minor is adjudicated. This contrasts with adult court in which a criminal defendant is prosecuted. A juvenile criminal defense attorney represents a minor in these types of cases.

Dependency cases in juvenile court are also known as child in need of care cases. These court cases are designed to determine whether a juvenile should be removed from his or her home environment, or whether some other type of intervention is necessary due to allegations of abuse or neglect.

As mentioned previously, in a juvenile delinquency case, a minor is not found guilty of a crime. Rather, a minor is adjudicated to be involved or not involved in the alleged offense.

The most restrictive option of a court is to confine a juvenile to a detention center. A court can also place a juvenile on house arrest. Another alternative is placing the minor on probation.

A typical sentence in a juvenile delinquency case will include counseling, community service, or a letter of apology. Depending on the specifics of a case, a juvenile may also need to participate in therapy or treatment for abuse of or addiction to a mind-altering substance.

Options in a Juvenile Dependency Case

A court also has the ability to place a child in foster care. Another alternative is placing the child in some type of facility.

In a juvenile dependency case, a reintegration plan is also developed. The goal of this plan is to bring the parent back into the custody of a parent or parents, if reasonably possible.

A juvenile in a delinquency case is entitled to representation by a qualified juvenile criminal defense attorney. The first step in the process of retaining a lawyer is scheduling an initial consultation with counsel. An attorney will undertake an evaluation of a case. In addition, he or she will present possible strategies to defend the accusations in a particular case. The Law Office of Leon Geller offers free initial consultations, so contact us today.