Ernesto Arturo Miranda had a troubled childhood and would progressively spend more and more time in reform schools as well as federal and state prisons. His crimes included burglary, auto theft, and, what would be the reason for the landmark decision that carries his name, sex offenses. 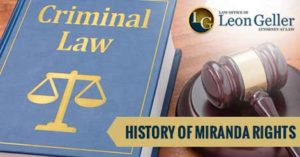 After the rape was reported, the brother of the rape victim spotted Miranda in a car whose registration matched the one provided by his sister.

When Miranda was placed on an identification lineup, the police told him that the victim had positively identified him. He subsequently confessed to the crime.

Later, the police took him to the victim to confirm whether his voice was a match. With the girl present, the police asked Miranda if she was the one he had raped. When he answered in the affirmative, the victim identified his voice as that of the perpetrator. He was taken to a room where he put down his confession in writing.

Even though the preprinted terms on the confession form declared that the statement was voluntary and with the confessor’s full knowledge of their rights, at no point had the police told Miranda that he had the right to a criminal defense attorney and could choose to remain silent.

The court assigned Miranda an attorney, Alvin Moore, for the trial. Moore sought to have the confession ruled out as evidence, but the court declined. Miranda was convicted for rape and kidnapping and sentenced to 30 years. The Arizona Supreme Court declined to overturn the sentence.

Miranda’s case, together with three similar cases, was brought before the U.S. Supreme Court in 1965. Phoenix attorneys John P. Frank and John J. Flynn, working pro bono, argued before the court that Miranda’s 5th and 6th Amendment rights were violated by the police.

They posited that given Miranda’s limited education as well as emotional state at the time of his arrest, he was not aware of his right not to self-incriminate or to have a lawyer at his side.

The court agreed and in the defining 1966 ruling of Miranda v. Arizona affirmed that suspects have the right to remain silent and to have legal representation. The Supreme Court also barred prosecutors from using statements by defendants that were made while in custody unless the police had notified them of their rights. Miranda’s conviction was subsequently overturned.

Miranda’s case was subsequently retried in Arizona, but this time the prosecution excluded the original confession.

Miranda was sentenced to 20-30 years but was released on parole in 1972 after 11 years. By this time, the Miranda Rights had been immortalized and so he began selling Miranda cards bearing his autograph.
Miranda later was convicted of several driving offenses that led to the loss of his right to drive. When he was arrested for the illegal possession of a gun, he was sent back to prison for violating his parole.

Miranda was released in 1976 and barely a month later was stabbed to death following a fight in an Arizona bar. Ironically, the suspect in the stabbing exercised his Miranda Rights to remain silent and was eventually released without charges.

The Miranda Rights today are a critical pillar in the protection of the rights of criminal suspects. No matter how serious the crime you have been accused of is, “You have the right to speak to an attorney.” If you find yourself as a suspect in a criminal case, get in touch with Attorney Leon Geller to ensure the legal process protects your rights.