Assault and Battery Lawyer Serving Rockville, Gaithersburg, Bethesda and all of Maryland 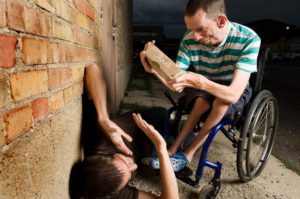 Assault and battery charges are among the most commonly charged offenses in our criminal justice system. Most people only have a small understanding of what actually constitutes assault and battery. That’s due to each state codifying the law differently. In Maryland, “assault” incorporates the crime of battery, and state law does not include a separate offense for battery.

A misdemeanor or a felony can be charged as an assault in Maryland. Whether you’re facing a serious felony assault charge or a less serious misdemeanor assault charge, you can’t afford to ignore the potential consequences of a criminal conviction.

In addition, prosecutors take assault charges at all levels very seriously. Thus, at the Law Office of Leon Geller, we take your criminal defense just as seriously. With over 30 years of experience in the courtroom and a skilled criminal attorney, we have helped numerous people just like you reclaim their lives and freedom after an assault charge.

First degree assault is a felony offense in Maryland and is punishable by up to 25 years in prison. Depending on the facts surrounding your case you could face consequences including, but not limited to, a long period of incarceration and probationary supervision. A conviction can damage to your reputation and job prospects.

Under Maryland law, first degree assault is defined as any intentional behavior that causes serious physical injury to another person. Assaults carried out with a firearm or other weapon are considered aggravated assault crimes and are prosecuted aggressively.

Second degree assault is a misdemeanor offense under Maryland law. However, it still carries a possible 10-year prison sentence, as well as the potential for fines and permanent criminal record. An individual can be charged with second degree assault for:

The challenge with criminal assault cases is that police officers tend to make arrests and ask questions later. Law enforcement can’t play the role of judge and jury, so they use a broad brush when making arrests.

Unfortunately, innocent people get caught up in criminal charges, forcing them to defend their reputation and fight for their freedom. Over the years, Attorney Geller has worked with victims of assaults who were wrongly charged as perpetrators.

At the Law Office of Leon Geller, we immediately begin working towards the best result: We investigate the incident surrounding the assault allegations, we speak to witnesses, and we review police reports, body camera footage (if available) and eyewitness accounts. Most importantly, we listen to you and your side of the story.  Although many cases never make it to trial, we believe in being prepared and gathering all available evidence in your defense.

Work with an Experienced Maryland Assault and Battery Defense Lawyer

Thorough and competent assault and battery defense doesn’t have to be expensive. Our goal is to make high-quality criminal defense affordable and accessible.

Don’t spend another second worrying about how you’re going to get your life back.

Call to speak to an experienced assault defense lawyer about your case and your options. The Law Office of Leon Geller serves clients in Rockville, Maryland and the surrounding communities. Contact us today at 301-327-2572.